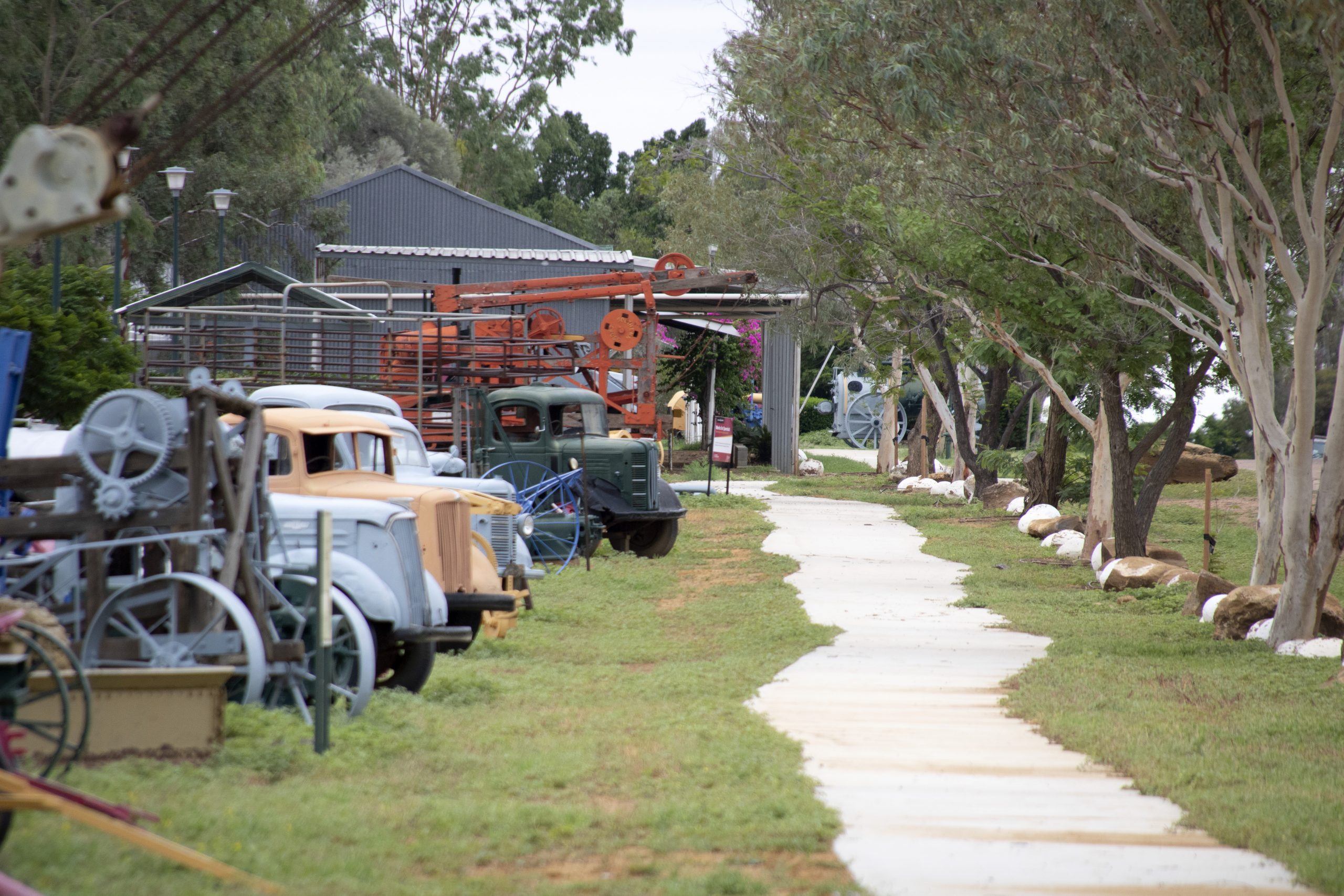 Ilfracombe is located in the heart of Queensland, Australia, between Longreach and Barcaldine. The Ilfracombe district was explored by the New South Wales Surveyor-General, Thomas Mitchell in 1846, by Edmund Kennedy in 1847 and by William Landsborough in 1862.

In 1872, Alexander Buchanan acquired one million acres of land which became Wellshot Station. Partnerships were formed with Scottish and New Zealand financiers in order to develop the property and build permanent water holes. To this day, visitors can still see the flagstones at the 12 mile that were cleverly placed to not only catch water, but to reduce erosion. In 1893, modern technology made it possible to sink a bore one kilometre deep underground. Precious water flowed across the country and made it possible for the land to carry more sheep than ever before. Because of this, Wellshot Station was the largest sheep station in Australia.

The railway arrived in 1891, and the town was renamed Ilfracombe to avoid confusion with the station. The town was thriving in its day, and a forward thinker by the name of Patrick Finn from Barcaldine decided to pull down his pub in Barcaldine and cart it by bullock teams to Ilfracombe where he rebuilt it before the railway actually arrived. He called it the Wellshot Hotel, which still stands today.

Another famous building is the Langenbaker House. Harry Langenbaker was one of the first teamsters to move his house to Ilfracombe, but because of ongoing droughts and introduction of modern transport, there was no longer a need for teamsters as a method of transport. The Langenbakers then settled down in Ilfracombe and raised 11 children.

Ilfracombe (pronounced; Ill – fra – comb) is located 28km due East of Longreach on the Landsborough Highway and was named after a small Devonshire town in England. Ilfracombe was founded in 1891 as a transport hub for Wellshot Station, which at the time held the largest number of sheep on any station in the world. The shire also claimed the record of the largest mob of sheep ever moved as a single flock in 1886. 43,000 sheep were moved through the area by a droving team of 27 horsemen, not including the cooks, blacksmiths and hands needed to accompany the drovers.

Long before the railway reached its way to Ilfracombe, wool transport consisted of giant wool laden wagons drawn by up to 30 horses, taking three months to carry the load of wool over the 650 kilometres to the nearest port, which then was Rockhampton. The town had three hotels with plenty of accommodation, each with its own dance hall, two general stores, a billiard saloon, a coach builder, a soft drink maker, a couple of butchers, a baker, dressmaker, three commission agents, and a saddler. Today there are just over 268 people living in the Ilfracombe.

Experience the sense of freedom and adventure as you spend time exploring the charms of Ilfracombe, you can’t miss ‘the Great Machinery Mile’ an amazing line-up of historic machinery stretching over 1km.
The collection of machines leads you to the Folk Museum, a replica of an early station residence, also situated within the museum complex is Oakhampton Cottage which offers a tangible glimpse into early outback households and Romani Hall, a memorial to the young men of the district who answered ‘the call to arms’ and is dedicated to Australia’s Light Horseman.  Visit the Wellshot Centre learn about the story of Wellshot Station one of Australia’s greatest sheep and wool producers.

Call into Wellshot Hotel an exceptional and historic outback pub, standing exactly as it was established over 120 years ago it is well worth a wander through and to finish off your day you can just relax in the artesian spa.

Ilfracombe Machinery and Heritage Museum – Otherwise known as The Great Machinery Mile, hosts a range of equipment from standing engines to earthmoving machinery. The display is a graphic timeline of the evolution of the pastoral and transport industries.

Wellshot Centre – Tells the story of Wellshot Station, one of Australia’s greatest sheep and wool producers. The iconic and welcoming Wellshot Hotel stands in proud testament to the good times and the hard times.

The Folk Museum – Filled with rare glimpses of a bygone era, the museum also showcases the role of women and children of the west.

The Jackson Collections – The lifetime collections of brothers Hilton and Ike Jackson is a spectacular display of 30,000 bottles and a collection of memorabilia gathered from the World Wars.

Romani Hall – a thought-provoking tribute to the young men of the district who answered “the call to arms”, and is dedicated to Australia’s Light Horsemen.

The 12 Mile – a short drive out of town offers a magnificent example of nineteenth century bush craftsmanship – thousands of naturally formed flagstones form a leak-proof reservoir.

Also in this section